Film Pairing— Movies Of Our Times: The Ides of March, Margin Call

Films do many things for us. They allow us to escape and to engage in worlds we can only imagine with a little creative assistance. They can make us look at things in new ways and embrace ideas larger than ourselves. They can also merely act as a mirror of our times. In some ways, this last objective is the least worthy. But to look at it in another way, they are saying “we have a problem here,” and, at least by implication, “what are you going to do about it?” They are calls to action.

Both The Ides of March and Margin Call give us a real, not particularly sensational, but somehow riveting view of two very serious problems we face in this early part of the 21st Century — corruption in our political and financial institutions. In other hands, the subjects could be boring. Not here.

Ides is pretty much George Clooney’s movie. He co-wrote it, co-produced it, directed it and starred in it. But that is not to say he demanded center stage. Smart guy that he is, he was willing to chance letting others show him up. Ryan Gosling, Philip Seymour Hoffman, Paul Giamatti, Evan Rachel Wood, and Marissa Tomei were among those who shared the screen and did so extremely well.

Clooney plays a presidential candidate trying to get the Democratic party’s nomination. Much of what we’ve seen this year with the real Republicans should show how sleazy the process is above ground. This film takes a candidate “you can believe in” and pretty much destroys the myth and reinforces the notion that anyone falling in love (and that doesn’t have to mean romantically) with a politician is destined for a broken heart. As is the case with most really good films, supporting roles (and their players) are as fascinating if not more than the principals. 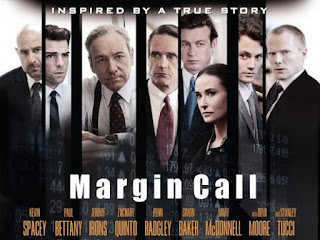 Margin Call is, in many ways, less cinematic. It is small-screen stuff, very seldom leaving the offices of an investment banking firm. It will not suffer on your flat-screen TV. But that doesn’t diminish the tight and surprisingly suspenseful story that unfolds. The movie also benefits from a remarkable cast. Kevin Spacey, Paul Bettany, Jeremy Irons, Simon Baker, Demi Moore and Stanley Tucci are among the players who are on a sinking ship. Their solvency and that of the firm are literally (and I do mean to say that) on borrowed time. A lowly worker discovers what management doesn’t know, the bank is about to fail. By the time they verify his findings management understands it only has hours to figure out what and who to throw overboard. As in Ides, the solution usually comes from those who have the coldest of hearts.

The only film that could be better than these two is a third that can as effectively weave together the two themes with the same quality of screenplay, acting and directing as these two accomplish. And a final word about the acting, these two films show that the current pool of English language acting talent is as good if not better than it ever was. These are repertory performances with rich, deep characterizations in tight, well-written dramas.

The Ides of March is up for an Academy Award for best-adapted screenplay (it was based on a play), and Margin Call is nominated for best original screenplay, though no doubt inspired by actual events. Both films have been honored many times over by various film-related organizations.

If we want to drink what the characters drink, we’d probably go for the Scotch. These are essentially East Coast films, so a Chardonnay is out of the question.

Posted by Ronald Tierney at 8:32 AM