Opinion — The Art Of The Flaneur 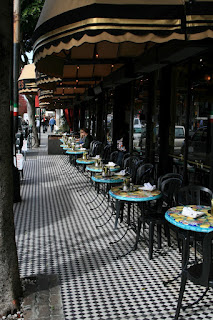 Not long ago, The New York Times ran an article about flâneurs. This isn’t a French word for someone who makes custard desserts. The word means: “a person who strolls about idly as along the boulevard; idler,” says my Webster’s New World Dictionary. Actually the Times story was about cyberflâneurs, but I don’t want to talk about “surfing the Internet,” but meandering about the physical world. I want to explore meanderers and street dawdlers. You might call us “loiterers,” if you are of the view that one’s nose must always be on the grindstone.The reason that we still use the French word is that there is nothing in the English language that translates literally. The word is more than an idler and a dawdler, yet it is someone who walks without a specific purpose or destination, perhaps merely as a civilized, risk-averse adventurer. It is a city walker who goes where curiosity and/or whim leads. It is seeking answers without posing the question. If you did this in the countryside, you’d be a hiker and no one would look at you askance or wonder if you were up to no good. They would think you were looking for the yellow-bellied sapsucker or a wild rose. If you meandered about most American neighborhoods you’d be stopped and questioned for suspicious activity. And in fact, in most American cities, uglified by strip malls and interstate ramps, walking around is not a very appealing activity anyway.

The flâneur is more likely to be able to practice in European and Middle Eastern cities and towns. The older the city, the older the civilization the less likely, I suspect, it has been tampered with by some of the more cold-hearted, crass modernizing city planners who are dominated by need for parking lots and big box stores. In North America, the pickings for the romantic flâneur are fairly slim. One is often assaulted by the nightmarish repetition of chain stores. A street of Starbucks, McDonalds, Walgreens, Seven-Elevens, and Radio Shack can be anywhere. Why would we ever leave Houston or Dallas if we were to end up on the same street in Cleveland?

New York is a decent city for us. It’s possible to meander about Manhattan and have interesting and varied experiences. I’ve had interesting walking experiences in New Orleans and Washington D.C. (two of my favorite cities) as well, but the strolling areas are few and small. So, while I am open to correction and addition, I would make the case that San Francisco is the best American city in which to practice the art of the flâneur. I am not saying that because I live here. I live here, in large part, because I am a flâneur.

If you are a flâneur seeking life along the water, San Francisco is surrounded by it on three sides. The West end of the city butts up against the ocean. The North end of the city is where the Ocean meets the Bay, which, in turn, sweeps around the entire East side. So there are beaches, marinas, parks, piers, shopping areas, historic buildings, farmer’s markets, neighborhoods, and restaurants, not to mention baseball parks, biotech centers and abandoned steel mills. 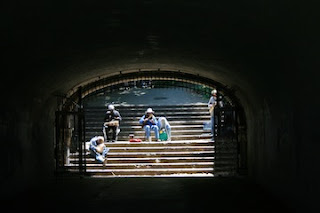 Inside these watery edges are hills, hills and more hills. And because there are hills, there are also valleys and all sorts of neighborhoods on top of the ridges and beneath them. There are the predictable delineations of the areas to be perused. Union Square is the heart of shopping, from Banana Republic to Hermes. The financial district hosts the expected high-rises of world banks and high-tech Pacific Rim headquarters. There are the usual downtown streets, some with galleries and unexpected restaurants as well as nameless bars serving whiskey and rye. The Civic Center has made room for the grand spaces — the Opera House, Symphony Hall, Asian Museum, Central Library as well as a gathering of city, state and federal buildings, all this near UN Plaza, which has its own Wednesday farmer’s market.

But beyond all of that, and far more interesting in many ways, are the many towns within the town — villages in some cases, neighborhoods perhaps. There is Chinatown, where there are streets lined with fresh produce and alleys filled with the plastic clicking sounds of Mahjong tiles. There is the Mission, a huge, largely Hispanic enclave, a city unto itself, within a city. Bakeries, restaurants and bookstores reflect the rich culture of Mexico as well as Central and South America. It is also — and knowing its redundancy to put it this way — the new avant garde. Writers, artists and the young and chic live or at least go clubbing there. Then, the legendary the host of the Beats, North Beach provides beautiful churches, incredible Italian restaurants and coffee shops. Grant Street, a block above a more tourist-oriented Columbus, provides a variety of one-of-a-kind shops, galleries and restaurants. There is the Castro, the gay neighborhood, falsely and sadly mischaracterized as “notorious.” These areas, along with the carney-esque Fisherman’s Wharf and the hippie-hyped Haight-Ashbury, still living off the “summer of love,” are what the world comes to see.

However, I’d like to point out that these are the “known knowns,” as one of our more poetic war promoters pointed out and there are “unknown knowns ” to consider. For these special places for flâneurs to roam we wait until next Monday's post.

CAPTION: Photos are from the San Francisco album on my home page. Please click here to see more.

Posted by Ronald Tierney at 7:56 AM