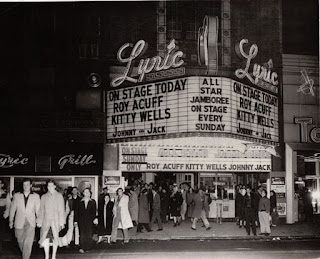 Very personally and specifically, downtown Indianapolis was a rich resource for my early and later fascination with private detectives and the search for the truth tales we ascribe to these lone and imperfect heroes. My interest began when I was maybe ten years old.

This would be in the 1950s. I would often go downtown with my brother to attend the movies. If he had other things to do — he worked in the family restaurant business as I did from time to time after turning 12 — I would go by myself. There were several big movie houses, all within a few blocks of each other. A few still exist. The Indiana Theater houses the Indiana Repertory Company. The Circle hosts the symphony. Great uses. But some of the grand old theaters are gone. Loews, Keith's, and the Lyric no longer exist. I went to all of them. On those trips when my brother wasn't with me, I'd take the opportunity to watch Westerns, which he didn't appreciate all that much, as well as some of the low-budget black and white crime flicks, which always seemed to involve shadows and alleys and all sorts of people coming to a bad end.

Inspired by the films, no doubt, I would sometimes leave the theater imagining myself to be a private detective on a case. Downtown provided tall buildings, alleys and some great public buildings. The Indiana War Memorial with its long, narrow back stairways and the dark, eerie room with a tomb, was a perfect place to lurk, while I waited for a suspicious character to light up my imagination. There as also the Central Library, which figured hugely in my life well into adulthood. There were parks and all sorts of people I could imagine being part of my investigation. I followed several of them, unbeknownst to them (strange word, “unbeknownst”), ducking into doorways and pretending to look into store windows. One could wander around the big department stores too — Ayres and Blocks and Wassons. My grandmother introduced me to shopping and she had these big old stores figured out. One went to Ayres for women’s clothing, tea and ice cream sodas. One went to Blocks, or L. Strauss, for men’s clothing. But if you wanted sheets, linen and such, you went to Wassons. If you wanted shoes, you had to go several blocks to Stouts on Massachusetts Avenue, a wonderful few blocks of old and at that time, picaresquely dilapidated buildings.

But nothing in those very young days fascinated me as much as the movie theaters, where so much magic happened. Later I would check out the neighborhood theaters before they too began to disappear, fall into disrepair or converted to some unrelated use. The little Emerson theater was within walking distance of my grandmother's house, where I spent many a weekend. I went on my first high school dates at the very modern Arlington. This was after my creepy stalking phase. There were the older neighborhood theaters like the Rivoli and the Irving on the East Side. On the North Side was the Vogue. On the West, where I worked in a restaurant initially called The Canary Grill, as a busboy and dishwasher, were the Bell and the Belmont. I was scared out of my wits, watching The Thing at the Bell. 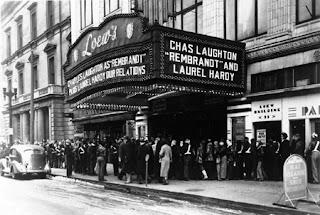 There were movie theaters on the South Side in Fountain Square, a kind of second downtown, where another writer of Indianapolis mysteries, Michael Z. Lewin, grew up. But Fountain Square seemed almost like another city to me then. I don’t remember going there as a kid, though the skeletons of these old movie-burlesque houses still exist. In addition to the grand old theaters in the heart of the city, there was the Fox Theater, once called the Empress and before that The Colonial. It was in a hotel building and was famous for burlesque. Later it became a porn house. In my mid-teens I snuck into the tawdry, run-down Fox Theater to see Nudist Colony on the Moon — a horrible movie no matter what standards you hold.

The other thing I remember is that Indianapolis, like many cities, went through phases. Some might like to think that this current bubbling life in the city’s center is something new. It isn’t. There was a time, before I was born, when it was a major railroad hub. It was a big city at that time, long before anyone even heard of Dallas or Phoenix. It had brick and cobblestone streets, gaslights, carriages, a bustling city with immigrants and travelers. The Magnificent Ambersons, the famous book and subsequent film, was set in this golden era in Woodruff Place, another area that needs to be preserved. Later, in the 1940s and 1950s, before the interstates and the flight to the suburbs, everyone went downtown for fine dining and not so fine dining, for live shows and movies and just to watch all sorts of people do what all sorts of people do. Though I don’t follow strangers around anymore, I still enjoy people watching them and I’m not cured of making up stories about folks I know absolutely nothing about.

Certainly I’m glad downtown Indianapolis is bustling again because it is my hometown and because I am still creating stories about crimes in this fine, old Midwestern city. I am happy that the energy is back and sad that those who had the power weren’t able to save more of its vibrant history.

On Monday, the super revelers will be gone; but I hope you’ll visit this blog that day for one more entry on Indianapolis. It’s time we think about transportation, then and now.

Posted by Ronald Tierney at 8:39 AM