Opinion — Indianapolis Places, Getting Around Then, Now And Later (Part Three) 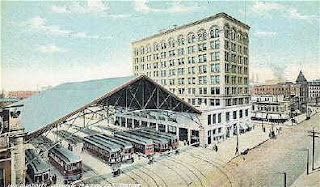 After the Super Bowl, perhaps we can hold onto to some of that city pride and entrepreneurial energy. In the last few years I’ve been reading about the mass transit battle in my hometown. I’ve found that the argument against having decent public transportation is puny as well as shortsighted and the argument for it without an ounce of creative spirit.

The unfortunate part is that mass transit should never have been disassembled. It existed and it worked. But since it has been destroyed by shortsighted folks in the past, and stymied by unimaginative folks in the present, there needs to be some way to ignite a creative flame so that Indianapolitans are not required to own automobiles to live in the city. Public transportation, especially inside 465, would be especially helpful to service employees, students, and pensioners, not to mention people who don’t want to be stuck in traffic, or depend on off-shore oil or maybe just want to read a book while they commute. In my early teens I went to my 50-cent-an-hour job all the way cross-town on an electric bus. I went downtown on weekends for fun and attend a matinee at theatres, many of which are gone. This was before the proliferation of malls.

In San Francisco, where I live now, the city hasn’t done a whole lot better in saving old theaters, but they have smartly re-engaged historic trolleys that travel short and or scenic routes. One route parallels the San Francisco Bay. Beautiful old cars they are. One of my favorites is one used in Milan decades ago. But the trolleys, old and new, aren’t just pretty tourist rides connecting Fisherman’s Wharf to the Ball Park, which they do. They work for residents and commuters as well. Condo owners and apartment dwellers near the Embarcadero use them to get to work in the Financial District. More modern, metro subways link to overland bus routes where that was the best solution. Passenger trains come up the Peninsula into the downtown from outlying towns in the Bay area. They connect with other forms of transportation and another underground train (Bay Area Rapid Transit) connects the East Bay to San Francisco and the South Bay and to the airport and soon to San Jose. When you think San Francisco, you may also think Cable Cars, but that’s only one of the exotic choices we have. While they take workers into the Financial District from the city’s West side, the cable cars are mostly for tourists who want to get a glimpse of history. There are also ferries that connect the North Bay to San Francisco and to Oakland and to Marin County. During rush hours, workers come and go that way. The rest of the time it’s transportation for tourists and seniors. Water taxis, using the Bay, are on the drawing boards as well. City planners here have taken off the blinders. Figure out what works. 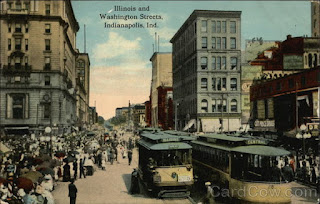 It’s true, the transportation mix used for the more densely populated San Francisco Bay Area is likely not the exact blueprint solution for Indianapolis, but there are ways to use it as inspiration, allowing forward thinking Indianapolis city planners to customize it to scale and geographic as well as demographic conditions. There are no great bodies of water or steep hills in Indianapolis, for example. On the other hand, why do we limit ourselves to solving our transportation problems with cars, cars and more cars? Nothing wrong with cars. But there are other ways for people to get around that use less energy, save time and money, and take up less space.

Why isn’t there a trolley, perhaps historic, running from Fountain Square (which, if they haven’t, should pass strict preservation laws before it’s too late.) to downtown and back? All they would have to do is unearth existing tracks on Virginia Avenue. With a little imagination, the history-rich Fountain Square could be connected by trolley to lively Massachusetts Avenue and its beautiful historic and lively urban neighborhoods, dropping off downtown office workers as they go. Union Station could be put back to practical use, utilizing an existing historic landmark in a practical way for commuter trains coming in from the east and west, perhaps even a monorail from the airport. Why should visitors to Indiana’s capitol city stay at a boring, isolated hotel at the airport? If they are coming to Indianapolis, they need to be in Indianapolis. Meridian and Washington Streets could easily support some mode of express transportation — straight shots north and south, east and west. One might even consider making the Canal navigable for water commutes all the way from downtown to Broad Ripple. (Raise High The Bridges, Seymour.) The water way is already there. And, if I remember correctly, one can make it at least to Tenth Street before being stopped by a low bridge. A little re-engineering and the city’s stubborn practicality could be married to some uncharacteristic but desirable romance.

We may have forgotten that mass transit existed and worked until owning a car and a home in suburbia became the overwhelming American dream. Fortunately there appears to be a trend back to the center of cities. I can’t help but think that part of the lure is the charm of the old buildings and the ease of getting around. Many of our young cherish what’s left of our past as a means to give richness, continuity and meaning to their future.

As Indianapolis grows and, attempts to create an environment to compete for tech, biotech and other forward-thinking industries and the vibrant, youthful energy that accompanies them, it must begin to identify, embrace and cultivate what’s left of its history and integrate what’s best about what went before us with what is before us. The great, livable cities do this. It takes creativity and courage.

However, thinking of the history of Indianapolis, as President Reagan once said keeping a bit of distance from the results of one of his decisions, “mistakes were made.” Let’s fix them. It may mean electing officials who want to improve the quality of life rather than being obsessed with teaching creationism in science class.

Posted by Ronald Tierney at 8:41 AM