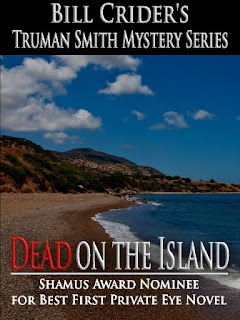 Early works by some of our best, current crime writers have been out of print for years. But times are changing. Many of these highly praised novels are available again as e-books and or trade paperbacks. “Old Gold,” is a periodic blog feature that focuses on these reissued treasures. Here's the story in the author's words.

I always wanted to be Raymond Chandler. Or Dashiell Hammett. Ross Macdonald would have suited me just fine, too.Things didn’t work out like that. The first book I published under my own name was a third-person narrative about Sheriff Dan Rhodes. The setting was a small Texas county far from the mean streets of Los Angeles or San Francisco. That was back in 1986, and the series continues today, so I really can’t complain.

After a couple of books about the sheriff, I got my chance at a private-eye novel. A new editor at Walker Books liked the idea, so I set out to do my Chandler bit. It didn’t work out that time, either, because as much as I’d have loved to write like Chandler, he was the only one who could. The same with Hammett and Macdonald. Everything I wrote came out sounding like me.

And that was just fine, too. I wrote five books about a Texas private eye named Truman Smith who in the first one, Dead on the Island, returned to his hometown of Galveston to try to find his missing sister. The books got good reviews, the first one was nominated for a Shamus Award, the editors (I went through two of them) loved the books, and I loved writing them. What could possibly go wrong?

Sales, that’s what. Not the sales of the hardbacks. Those were fine. But there was no paperback deal. That wasn’t fine. The publisher was making money on the books, but not enough money. So after five titles, the series disappeared. Truman Smith had a good run. He never found his missing sister, but he investigated the killing of an alligator and a prairie chicken, not to mention tangling with a couple of killers of people. Now he’s found a new life in e-book format, and all five books will eventually be published in that form. I hope he’s going to stick around for a while. — Bill Crider

Thanks for posting. It's an honor to have your story here.